37 years after the fall of the Suspension Bridge

On September 28, 1983, the people of Santa Fe attended an event they never wanted to see. The emblem of the city, the Suspension Bridge, could no longer withstand the onslaught of water, due to the flood and before 4.30 pm, half of its structure collapsed.

The great emblem, since 1927 and that linked the two banks of a city, was left standing half. For more than two decades the structure that fell remained under the bed of the Setúbal lagoon, until it was decided to rebuild it in 2002. FERMA S.A. participated in this great challenge. 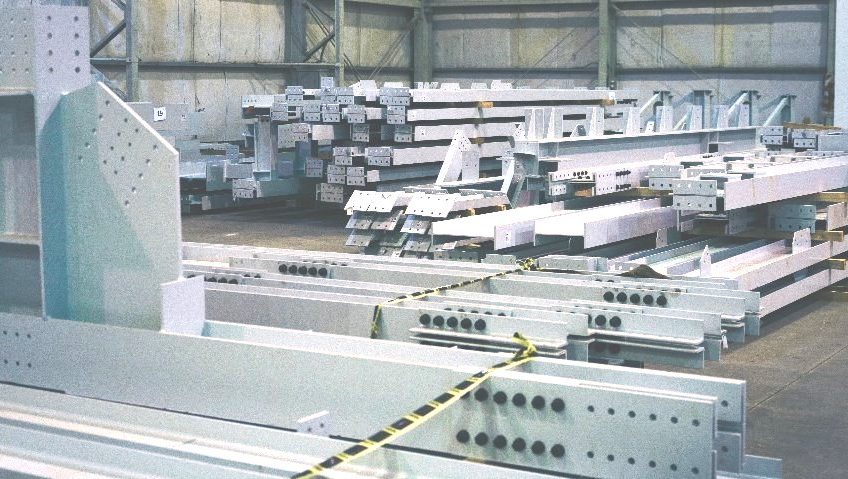 Hundreds of tons of structures ready to send to mining developments

FERMA S.A. continues with the production of mining projects, waiting for the normalization of work on site due to Covid-19. 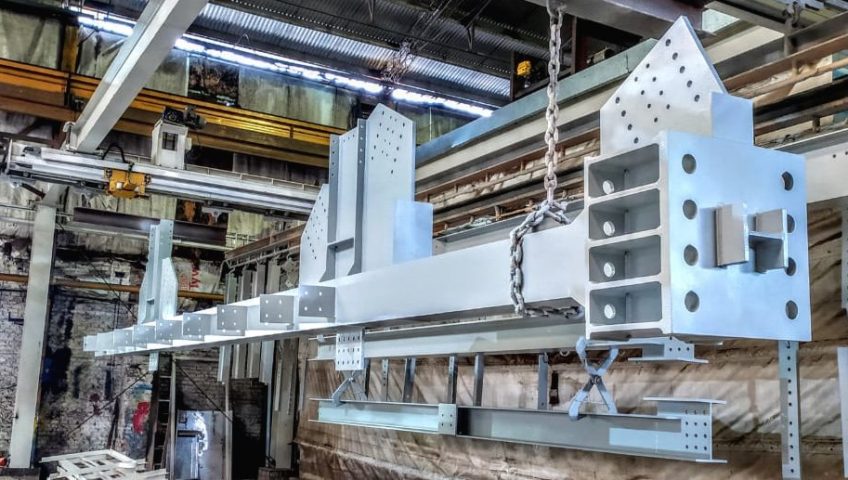 Advances of our products for Minera Exar, Edificio KCL

FERMA SA, continues to be part of the progress in the Exar SA Mining Project, located in Cauchari Olaroz, in the Province of Jujuy, a project that is being activated at more than 4000 masl. On this occasion, FERMA SA is in the process of manufacturing more than 1,100 tons of structure, painted with an anticorrosive treatment due to weather conditions, for the execution of the building called KCL.

Week after week, trucks with structure for delivery to the Exar Mining Project S.A. leave the FERMA S.A. plant, located in Esperanza-Santa Fe.

An Engineering area, a factory full of operators and a professionally consolidated team, are working tirelessly to provide responsibility to the client and to deliver the structures with the quality that characterizes FERMA SA under strict international standards and using the protocols of the standard. ISO 9001: 20015. 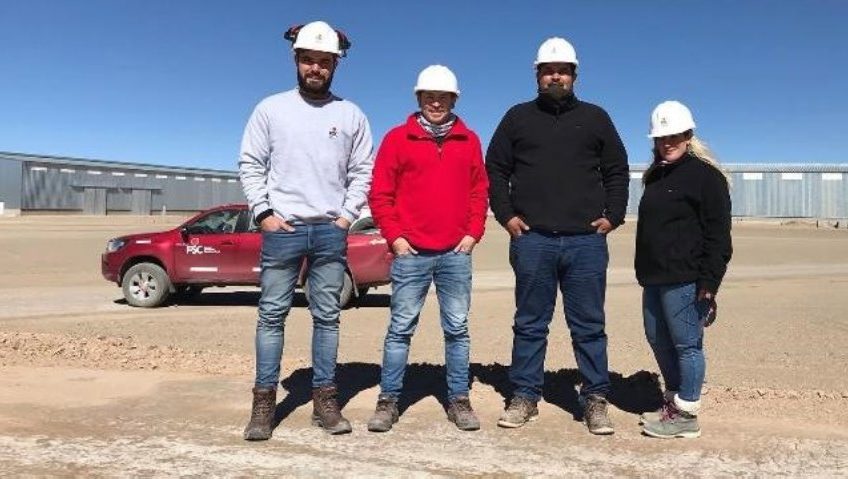 In the realization and execution of the Proyecto Minero Exar S.A. 2019-2020, professionals have participated; Graduate Ignacio Keller, the Architects Santiago Ochoa and Guillermo Palavecino, and the Technicians in Hygiene and Safety, María Montoya and Miguel González; who from their professionalism and experience have been able to overcome the adversities that arose in this environment, a project at more than 4000 meters above sea level, high winds, dry and cold climates, managed to overcome in time and form the challenge of setting up the Ash Industrial Warehouses of Soda, Materials, Reagents and Finished Product, exalting and confirming once again the virtues and potentials of FERMA SA 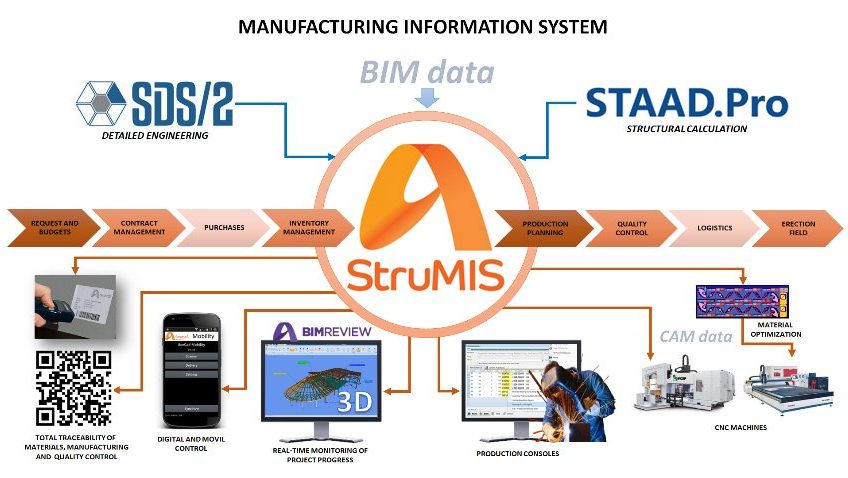 FERMA and the industry 4.0: towards the process digitalization

Nowadays, the global manufacturing sector is going through what is known as the Fourth Industrial Revolution, also called «Revolution 4.0». This has been promoted primarily by the impressive increase of information volumes, the development of computer systems and connectivity.

In this context, and with the desire to strengthen its position as a benchmark in the metal building market, our company has decided to advance in the implementation of a Manufacturing Information System to control and manage its processes.

Integration and connectivity between systems and technologies are the StruMIS keys: the world’s leading software to manage the manufacturing of metal structures. Based on the BIM technology information obtained from the calculation, design and detailing software, StruMIS allows to digitally manage all the processes involved in the supply chain, from quotation requests to final dispatch to the assembly site.

As main features and qualities of this system, we can mention:

Without a doubt, this technological leap represents today a great challenge for FERMA SA in its permanent search for competitiveness, innovation and a high level of service for its customers.

Gendarmería Nacional will guard Vaca Muerta: it is considered a “strategic target”

The resolution was published on Tuesday on the Official Gazette. The decision comes after the refinery attack on Saudi Arabia on Friday. Last June, there were at site shooting clashes between different groups of the labor union.

In 2015 FERMA S.A. made the cell for the stockpiling of sands. These sands are classified and collected in bulk for YPF company at the Añelo complex, province of Neuquén. This cell has an area of 8000 m2, 24 meters high and a total weight of 400 tons.

The government reported that the National Gendarmerie will be responsible for guarding the unconventional oil and gas field of Vaca Muerta. The decision was published Tuesday on the Official Gazette, and is known at a time when the world of oil is shocked by the attack to a refinery in Saudi Arabia on Friday.

According to sources from the Ministry of Security, the decision was taken after considering Vaca Muerta as a “strategic resource, such as nuclear power plants”. According to that official, the decision had been made several months ago, and buildings were even built there to house the security forces that will arrive at the area.

A ministry statement said: «The Ministry of National Security reports that the extension of the jurisdiction of Gendarmería Nacional will be notified, which will now also participate in the security of the geological formation of Vaca Muerta».

“From the point of view of this Ministry, which Patricia Bullrich directs, it is essential to provide physical protection to the facilities of the Hydrocarbon Exploitation Plants located in the Neuquén Watershed, more precisely in Vaca Muerta, with the objective of ensuring vital economic interests of the National State”, it adds.

“The unconventional oil and gas reservoir that extends into the mentioned basin constitutes an asset of vital importance for the National State’s energy and economic growth strategy. This assigns a preponderant value to the area, whose development must be protected through measures that guarantee safety for all and for the assets that are indispensable for the fulfillment of the objective”, it continues.

And concludes: «That is why this Ministry of Security decided to extend the jurisdiction of Gendarmería Nacional within the geographical space of the geological formation Vaca Muerta, which includes the provinces of Neuquén, Río Negro, La Pampa and Mendoza.»

It is estimated that the oil and gas activity of the three provinces that are on the site, considered the second most important on the planet, employs about 30 thousand people. Approximately 20,000 work in the Neuquén province.

In January of this year, the agreement between the oil workers, the companies of the sector and the government was signed to zero trade union conflicts affecting production.

One of the security issues affecting the site are the claims of the Mapuche Confederation of Neuquén and the Campo Maripe family, among others that claim ancestral rights in areas rich in hydrocarbons.

When the agreement between YPF/Chevron and the province of Neuquén was known in July 2013 for the exploitation of Vaca Muerta during the Cristina Fernández administration, members of the Mapuche Confederation took four drilling equipment.

In the last three years there has also been a fire in a car dealership in Neuquén capital, in addition to attempts at explosive attacks in wells from the towns of Centenario and Fernández Oro. In all cases, pamphlets with slogans of Mapuche Ancestral Resistance (RAM) were found. RAM is a radicalized group founded by Facundo Jones Huala today imprisoned in Chile.

Union fights also escalated in the region. In June of this year, there was a shooting confrontation at a deposit that ended with seven people injured and for which a UOCRA union leader was arrested. 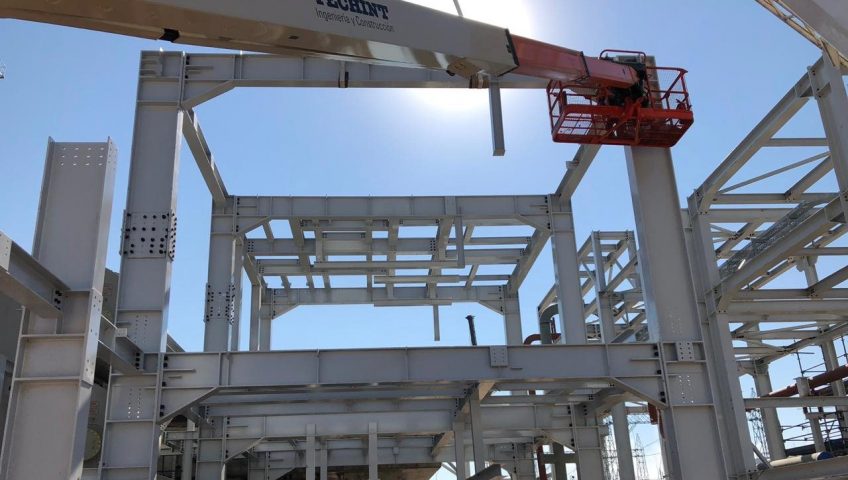 Considering the extensive seismic zone in our territory and with it the requirements implied by the application of current regulations, we report some criteria that in our opinion are important in seismic design and in particular in the connections of structural elements that allow a greater dissipation of energy due to inelastic deformations when the event occurs.

In conventional non-bracing frames, the design of the rigid beam-column joints must be carried out with a required flexural strength of at least 1,1.Ry.MP to recognize the possible overstrength and deformation hardening.

We are proud to provide more than 1,000 tons of steel structures to one of the leading companies in the market, General Electric, providing from the engineering to the erection of the expansion of the Thermal Power Plant, a project located in the town of Bracho, province of Tucumán.

In these times, where the generation of energy is full booming, FERMA carries out the engineering, manufacturing and assembly of all the stell structures of pipe racks and electrical trays, as well as buildings of the Power Plant. Among them we can highlight the building main «Turbine Building», with a height of 21 meters and beams lanes for crane bridge of 140 TT capacity.

This provision yields an amount of 1,400 tons processed with the latest generation of cutting, drilling, welding, shot blasting and painting equipment.